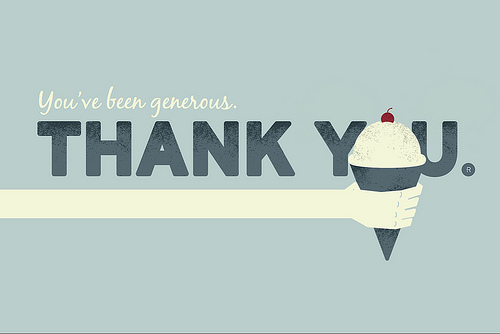 Saying thank you or giving social thanks it seems to me is highly underrated and often missed out on during personal interactions in the real world and even on social media. Saying thank you is not just the obligatory thing to say but a way to return social equity. Its almost like a dividend on the investment in your relationships. (Image credit: Flickr)

Here are some of my favorite quotes on saying thank you that have served as a reminder in recent times.

“As we express our gratitude, we must never forget that the highest appreciation is not to utter words, but to live by them.”
John F. Kennedy

“If the only prayer you ever say in your entire life is ‘thank you’, it will be enough.”
Meister Eckhart

“I would maintain that thanks are the highest form of thought, and that gratitude is happiness doubled by wonder.”
G.K. Chesterton

“I feel a very unusual sensation – if it is not indigestion, I think it must be gratitude.”
Benjamin Disraeli

So saying thanks on social media platforms whether it be for retweets, mentions, Facebook likes or Google+ shares only seems natural and is something that I endeavor to do. Admittedly I am not the best at it and am sure I have missed out people. But the realization that we built up and aren’t very much without out friends and networks of social connections has placed this in a new light more recently. I am humbled and grateful to be a part of yours so Thank you. Other than saying thank you are there other ways in which you show your appreciation or give social thanks for people on social media. If so please let us know in the comments below.