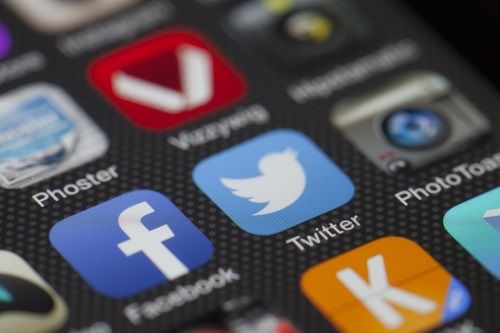 Why should you spend the time to include images along with your tweets?

The extra seconds required to add an image for Twitter posts will be worth it simply because of the engagement you get, and by engagement I am referring to clicks, retweets and favorites.

Don’t quite believe it?

Here’s data from Dan Zarella’s analysis of around 400,000 tweets: 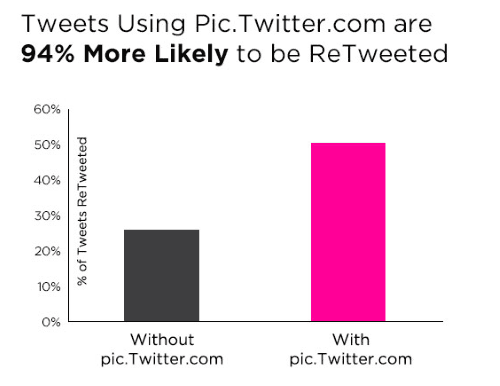 Buffer conducted a similar analysis on their recent tweets and found that tweets with images got a 150% more retweets. 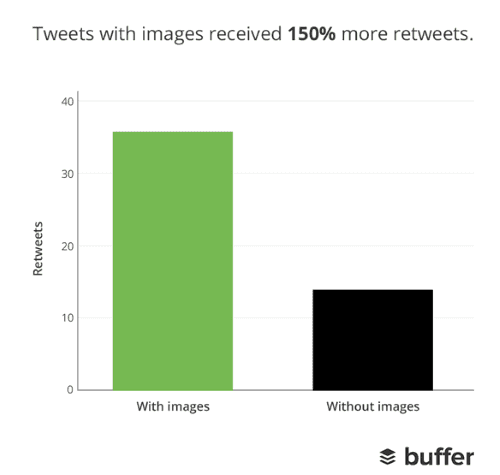 It would appear from their research that including images has the same effect that visual content has on most people – gets their attention and if used appropriately can entice them into reading more and following you. 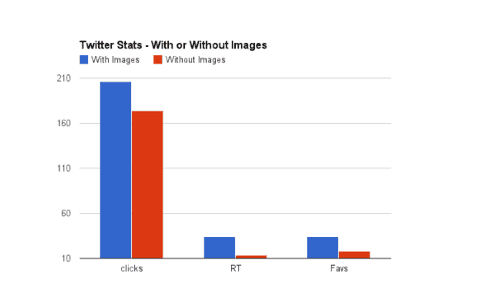 How to use images to increase clicks, retweets and favorites

Given that the recent changes that have been implemented on Twitter that allow for images to be displayed in a tweet. It only makes sense to use them to get and keep your audience’s attention. HubSpot with A/B testing has found that they have been getting 55% more leads with tweets which have images included.

So how do we use images to create this level of engagement? It’s not enough to use any old image on a tweet. You need to use the right image.

Read on to learn where and how to use the right images to keep your audience engaged.

Getting your images to be the main feature like below isn’t quite as simple as just adding an image. If the image isn’t large enough, more often than not it won’t get showcased. When this happens most people only see a pic.twitter.com link which people don’t really notice if scrolling through a feed.

So getting the image dimensions and aspect ratio right is important.

For the best resolution, even on desktop computer your images should be 1024 x 512 pixels. The aspect ratio should be 2:1, with the ratio referring to the width and height of the image.

At a minimum though the image should be 440 x 220 to ensure Twitter is not stretching the image.

So what happens if the aspect ratio isn’t a perfect 2:1?

If you feel the image is too small, consider adding white space to the background with your favorite image editing tool.

Add an image when linking to an article

When you use an image it stands out in your followers streams. Chances are that most of your followers will be following thousands if not hundreds of accounts and images help get your tweets seen in a steady stream of text based tweets.

While an image in every post isn’t required, using an image to complement an article is a natural way to get the article seen.

Use a twitter header image that best reflects your brand

You can no longer post your photos from the Instagram app to Twitter easily, as they have removed support for Twitter cards. However there is an easy solution. IFTTT helps solve the problem allowing your image to show up in the newsfeed using the view/hide function and also shows in the media gallery.

You just need to remember that you have about 96 characters before the text is cut off. So keep it short.

Use photo collages to upload up to 4 pictures at once

Twitter now allows you to add up to 4 pictures to your tweet in a collage format. Using a collage isn’t always the best thing for all tweets but it could potentially attract more attention whilst adding a unique flair to the tweet. Quaker oats leveraged this feature in their tweet below.

Everyone has their own style. Which @OatMealsNY recipe are you going to try? pic.twitter.com/fT9xP6oXO6

Don’t use images for the sake of using images because every tweet isn’t necessarily worthy of an image. The images used should convey meaning that relates to the tweet and be inline with your brand. Images that have a single focal point are easier to be seen and understood. 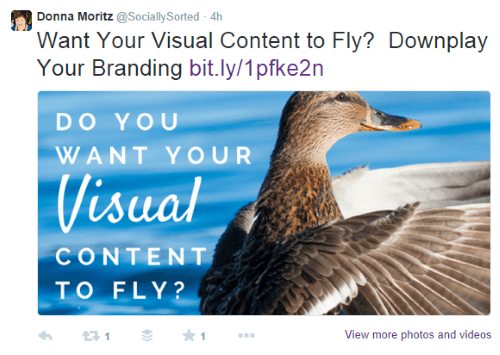 Writing a tweet which gives context to the image and including a link for your audience to read more works well according to Buffer.

Use variety to keep your followers engaged

While images are great Buffer in their research found that they are also getting engagement on Tweets without images but just a link. So variety can help keep your followers engaged. Consider adding a few different types of tweets to your content mix such as quotes, statistics, facts, link tweets and questions.

Use photos with tact

Funny images and or tweets, may not always be seen as funny by everyone in your audience. There is a fine line between being funny and being offensive, so use images with tact and care so as not to offend anyone. This also applies to all images including those of current events, not just ones aimed at being funny.

Use images to squeeze in extra characters

By using images you can actually get more space to get in additional text for your tweet.

For example @signupto promoted their new e-book by giving users a preview before they actually got the landing page thanks to twitter cards. Notice the text used in the image to explain what people can expect from the e-book.

To add variety to your tweets you can’t just tweet your own blog posts so consider looking up the content of influencers in your industry or a daily basis and especially their Photos and Video’s section of their Twitter profile for quick access to tweets with visuals. For example on Jeff Bullas twitter profile you see the Photos & Videos section. 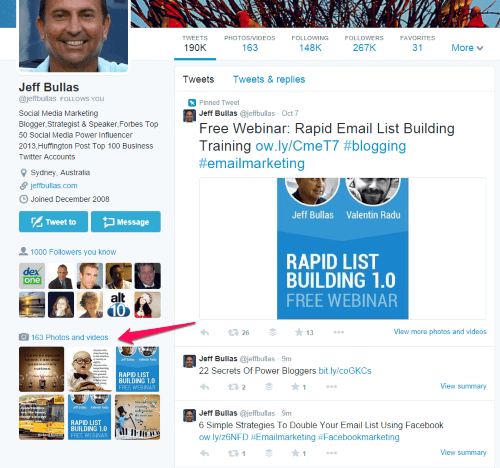 Clicking on that section shows you a series of his tweets with visual content. 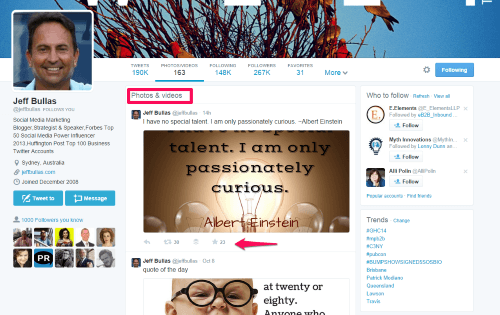 When you see retweets from someone, click on it and check it out. If its relevant and interesting bookmark it, favorite it (it acts like a bookmark which you can access on Twitter) or use Evernote. This should give you some shareable content for your audience which you can then schedule with a tool like Buffer.

If you have the Buffer extension installed in your browser you will see the buffer icon to add to you queue. 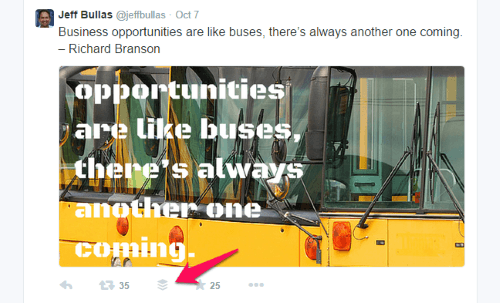 Alternatively you can click on the retweet icon and use the Buffer Retweet button as below.

Perhaps most important of all is the need to build consistency with the content and visual content you share, so your audience can come back to find more of the kind of content they appreciate.

Installing the buffer plugin will help make it easier to retweet at scheduled times, also make it a point to create images with the right dimensions to share on Twitter.

I hope you now see why it’s worthwhile to add images for twitter and how it can be done. This is especially important given how many of us are visual learners and if you are serious about getting more clicks, retweets and favorites.

Have you started adding images to your tweets? What is one thing that you find works well for you?