How to Increase Online Sales with the Psychology of Scarcity 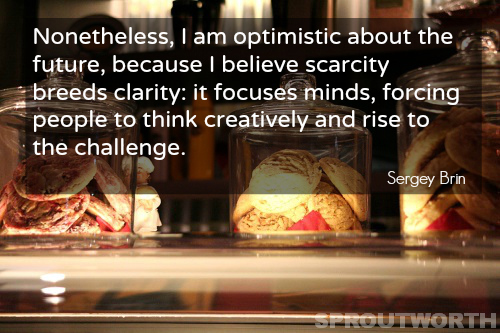 What if you could make one simple tweak to your business and saw an immediate increase online sales? How would you feel?

That’s a silly question, I know. It would feel great.

In fact you would probably use it straight away. Right?

Right! Who doesn’t want to be able to increase customer desire and sales?

Before we get into the how we increase online sales, let’s get a better understanding of human behavior in order to understand how people respond to scarcity and abundance.(Photo Credit: armigeress)

Researchers Worchel, Lee and Adewole in 1975 conducted an experiment to see how people would value cookies in 2 identical glass jars. The only difference was that one jar had 10 cookies while the other had 2. The results showed that people valued the ones in the near empty jar more. It seems the scarcity of cookies had somehow affected the participants perception of value.

The result could be attributed to the possibility that people who chose cookies from the near empty jar were thinking that others know something that they didn’t and hence is the yummier choice. In reality there may be more to it.

Much like the above example marketers are becoming increasingly aware that context matters just as much as the product itself. The near empty jar of cookies conveys valuable information to consumers.

Joshua Bell a famous violinist decided to play a free impromptu concert in the Washington DC subway. Bell usually sells out venues like Carnegie Hall with ticket prices going for hundreds of dollars. However in the context of the subway station, people ignored one of the most gifted violinists in the world despite his free performance. Few people stopped to listen. However in the context of a music hall or theater, his music is treated like a rarefied commodity with thousands of people vying for tickets. (Photo credit)

authors of the book Scarcity: Why Having Too Little Means So Much

“Scarcity captures the mind”. It promotes tunnel vision, helping us focus on the crisis at hand but making us “less insightful, less forward-thinking, less controlled”. Wise long-term decisions and willpower require cognitive resources. Poverty leaves far less of those resources at our disposal.

Their most arresting claim is that the same effects kick in – albeit not always with such grave implications – in any conditions of scarcity, not just lack of money. Chronically busy people, suffering from a scarcity of time, also demonstrate impaired abilities and make self-defeating choices, such as unproductive multi-tasking or neglecting family for work. Lonely people, suffering from a scarcity of social contact, become hyper-focused on their loneliness, prompting behaviours that render it worse. In one sense, Mullainathan and Shafir concede, scarcity is so ubiquitous as to be almost meaningless. But the feeling of scarcity – of not having as much of something as you believe you need – is something more specific and agonising. To use the authors’ favourite metaphor, life under such conditions is like packing a tiny suitcase for a trip. It entails a ceaseless focus on difficult trade-offs: the umbrella or the extra sweater?

So how can the principle of scarcity be used to increase online sales in a business context?

Simply by creating an environment that promotes temporary tunnel vision. As humans we generally attribute the following emotions and narrow time frames when we encounter scarcity:

While Facebook is used by over a billion people today, in the early days the founder of Facebook, according to this video intended to keep the service available to college kids alone. While the scarcity strategy may not have been intentional it did work in helping increase the appeal of having and using a Facebook account in the early days.

Threadless incorporates scarcity in its live stock indicator which runs under each size available. In fact the company is known to produce just enough of its limited runs of products available so as not leave regular customers disappointed but gives plenty of warning if a t-shirt is selling fast.

Threadless does a great job of trying to keep frustration and disappointment out of its scarcity marketing by providing so much choice that it would be hard not to find something that appealed to your tastes and to email (those who sign up for the service) people as soon as a t-shirt they missed out on is back in production.

Quibb founded by Sandi MacPherson is also another example of a company that has applied the scarcity heuristic quite effectively. Quibb is an online discussion board that is frequently visited by a select number of technology professionals and entrepreneurs. Sandi MacPherson decides who gets access and who doesn’t. It is the exclusive nature of this community that appeals to people. It is a community that was designed to filter out the noise in open communities like Reddit and Hacker News whilst allowing people of noteworthy reputations to communicate with each other. The scarcity of the invites is a virtue of the service.

Scarcity can go wrong for businesses

The above are examples of the scarcity heuristic applied to increase customer desire and in turn increase onlines sales and signups. However if the psychology of scarcity is applied incorrectly it can go horribly wrong.

Mailbox and Tempo are 2 examples of just this. Both companies produced iOS apps that are productivity related and released the apps to a small group of users. However if you weren’t at the front of the line then you had to wait indefinitely before you could possibly get access. These users who had to wait took out their frustration on the companies by writing poor reviews even though they had never actually used the app.

To these potential customers the scarcity sales tactics of Mailbox and Tempo backfired. The companies tried to address the issue by providing reasons of technical limitations due to load testing. However to the potential users the message they were hearing was this is being available to those that the company views as important and the rest of you will just have to wait.

The difference with Facebook and Quibb was that the products started out as scarce and the companies ensured the perception that the service would remain so.

Why did it go so wrong? Why does scarcity increase customer desire in certain cases and make customers livid in others?

The second part of the cookie jar study in 1975 holds some clues. In this part of the experiment researchers wanted to know what would happen to people’s perception of the cookies if they suddenly became scarce or abundant.

Participants in the study were given either a jar of 10 cookies or a jar of 2 cookies. People with the jar of 10 cookies then suddenly had 8 taken away. Those who were given the jar with 2 cookies had 8 more added to their jars. The study showed that people’s perception mirrored the scarcity heuristic. Those who initially got the jar with 2 cookies rated them to be more valuable. However those who got more eight cookies and experiencing sudden abundance valued the cookies the least, in fact they valued them lower than those who started with 10 cookies in the first place.

In other words the study showed that a product can decrease in perceived value if it starts off as scarce then becomes abundant.

How can you apply the psychology of scarcity to increase customer desire in your business?

Here are a few examples.

If you have a SaaS business or an app development business, then you would need to justify your scarcity and ensure that you do not expand to the masses in order to reinforce the scarcity perception. Employ scarcity to reinforce trust with your users not break their trust. A unique way you could use this is to release it to a handful of people and give them the power to invite others to join. Google did this with Google Plus. Access was limited at first and effect it had on people who were in was that they felt like they had power because they could invite whoever they wanted. For those who were left out, it was like being left out of the party making them want to get in even more. So much so that people end up begging for an invite even before they know what the product is about or how it works.

If you have an e-commerce store then having time limited special offers on select products may be the way to go. However doing this on a regular basis can destroy the sense of expectation and desire that customers with the initial offers.

A service based company could offer a specialized personally tailored service to those who meet certain criteria much like the HSBC Premier account level of service.

The key takeaway in applying scarcity to your business to increase online sales is that you need to determine the best way to apply it and how often to apply it by taking into consideration your customer expectations. For example a daily deal site like Groupon sets the expectation of a discount environment.

People who sign up know what they are going to receive and Groupon works with retailers to deliver just that. However this won’t work for a real estate agency as it would raise questions about the quality of the properties they are selling. The last thing you want to do is abuse this technique because it will damage trust and once you loose their trust your audience won’t listen to you.

Scarcity increases customer desire because it forces action. You can’t really be a fence sitter if the product is not going to be available tomorrow. In other words, if you want it, you have to take action now. Consumers quite easily tend to put off buying something until later. They come up with endless reasons like – I don’t need this now, I ‘ll buy it when I have time or when I get my tax return etc. Procrastination is one of their biggest reasons, so you need to provide them with a reason to take action now.

People are continually faced with the daily emotions and challenges of life. A good marketer however knows how to sell to people using emotions. You cannot please everyone all of the time but if you consider your product or service as having the potential to make a positive impact on peoples lives, then you owe it to yourself to use psychology and the selling techniques available to you.

How will you apply the psychology of scarcity to increase online sales or sign ups on your blog or business? What challenges have you encountered in applying scarcity? Let us know in the comments below.